The original bestseller from the Netherlands and Belgium. 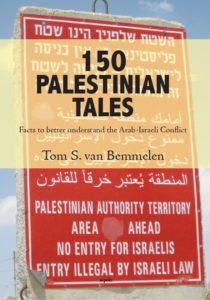 You’ve heard the many slogans of Palestinian propaganda.

They sound something like:
“Palestinian terror is a logical result of the occupation,” “Israel was established because of Western guilt over the Holocaust,” or, “The settlements make peace impossible.”

If you’ve felt that these accusations were misplaced but couldn’t articulate the reason why, then this book is for you. This book gives you the answers. It blows away the haze of Palestinian propaganda with real, verifiable facts.

The chapters are sorted alphabetically by topic so that the book can be used as a reference guide.

The rebuttal of every tale is supported with facts, quotes, and illustrations.

These 150 nonsensical, recurring accusations against Israel show how deep-rooted is the hatred against her.

“The great enemy of truth is very often not the lie – deliberate, contrived and dishonest – but the myth – persistent, persuasive and unrealistic. Too often we hold fast to the clichés of our forebears. We subject all facts to a prefabricated set of interpretations. We enjoy the comfort of opinion without the discomfort of thought.”
– John F. Kennedy

“Placing 150 of these common myths and misperceptions in one book is a credit to the creators, as the intertwining of these tales highlights the root of the hatred towards Israel (and Jews) that is widely distributed over the Internet and repeated again and again.”
– CIDI (Dutch “AIPAC”)

“Buy this book. It is an invaluable reference. It should be handed out to every student going to college. If Jewish Federations want to make a real impact, they would order thousands of these and provide them to local Hillels.”
– Influential website Elder of Ziyon

“It sounds a bit dry to read about facts, but you also have a lot of pictures in this book.
The explanations are very, very good and it really makes a person think and connect the dots.
Superb job.”
– Israel Newstalk Radio

“This easily navigated book provides a necessary counterbalance to all kinds of factually inaccurate and inconsistent framings on the Internet, new media and “quality papers” that are culturally accepted as truths.”
– SGP Christian Scientific Institute

“Hatred and demonization are obstacles in the road to peace, and this falsification of history is the ugliest weapon in the struggle against Israel. Now, with this book, you have an effective antidote.”
– Christians for Israel in the Netherlands (largest non-Jewish pro-Israel organization in the world)

“The thorough investigations of the 150 most heard accusations directed at Israel prove that these allegations are often untrue and often quite distorted.”
– Joods Actueel (the largest Jewish magazine in Belgium)

“This is the wonderful book I’ve been waiting for. Not only is it exquisitely written, but it is extremely necessary in society now.”
– Professor Dr. Hans Jansen, Simon Wiesenthal Institute, Brussels

Reactions of 13 readers of the book, unanimously positive
(on Bol.com, Dutch ‘Amazon’)

“Handy reference. In 150 clear sections, the situation in Gaza, the West Bank and Israel is explained.”

“I recommend this book to anybody who wants to know how the Palestinian fables really work together.”

“Clearly written and revealing. Arguments are based on facts and verifiable data. An illuminating view of reality.”

“A factual, clear picture that accurately reflects what is happening.”

“Mandatory material for schools and for our journalists. The stubborn misconceptions about the Palestinian/Israeli conflict are unfortunately persistent in the media. Therefore, these kind of simple verifiable facts are very important.”

“Wonderful book! Definitely a recommendation for schools, companies and the government, and perhaps at home.”

“Good book. I am glad that this book is there, and I hope that it will get a lot of publicity.”

“A fantastic overview of the Arabian Tales that are even sometimes repeated by the media. You can thumb through the book easily and have the facts and the real history. This book is going to be big!”

“This book should be read by all in Parliament. Representatives would surely assume different positions on Israel.”

“I felt a bit silly. This book was a present, and I read it in a few days with increasing amazement. I was already interested in the Palestinian/Israeli conflict, but this book was a complete eye-opener. I see it all very differently now. I have, when possible, checked some facts and found that the veracity of this book is high.”

“Too many people in the Western world have only moderate or no knowledge of the situation. Yet, en masse, they form positions and focus their critical arrows on the State of Israel unilaterally, without taking the trouble to find out what the situation actually, really is.”

“Anyone who does not want to become a victim of falsifications of history had better buy this book.”

“A must-have book for every Israel supporter. 150 Palestinian Tales, actually lies, clearly refuted and substantiated. Photos are added to support the rebuttal. If you’re behind Israel, this book should be on your desk.”