Press Release of Likud of the Netherlands, September 9, 2015. 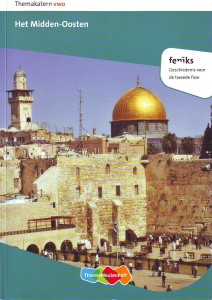 The ‘Theme-book The Middle East’ is published by Dutch publisher ThiemeMeulenhoff. It is intended for pre-university level high school students.

What does it teach Dutch youth?

1. The lie that Israel was founded because Jewish bankers blackmailed the British by granting loans.

2. The claim that Israel is “founded on injustice.” By stating this, the Jewish right right to self-determination is made unclear.

3. The lie that Arabs are legally discriminated in Israel.

According to the official definition of the European Union, the three statements presented above are anti-Semitic.

4. Jews are cruel: they deliberate committed a massacre of the Arab population.

6. This is actually a nonsensical assertion that Dutch schoolchildren has to learn. Nowadays, everyone can see how Islamic hatred and bloodlust against people of other faiths destroys the entire Middle East and North Africa on a daily basis. Since 1945, 250 times as many Muslims have been slain as a result of in-between conflicts rather than during the fight against the Jews.
This hatred against people of other faiths in the region is conspicuously omitted as a cause of the Arab-Israeli conflict. But this is one of the possible reasons for current developments in the Middle East.

7. Israeli textbooks spread historical lies to Israeli youth. In real life, the opposite of this is going on, like in this Dutch textbook. Likud of the Netherlands discovered a whopping 41 errors in the text about Jews and Israel – 35 more than listed here, even.

The growing anti-Semitism is a major social problem, also according to the Dutch government.
Deputy Minister of Education Sander Dekker emphasized how important it is that children “do not just learn about safe topics as Budget Day, but also about homosexuality and anti-Semitism.”
He said this because research revealed that one in five teachers find it difficult to raise subjects like fundamentalism or anti-Semitism in class.

This textbook is completely counterproductive, because these are precisely the subjects unmentioned in the book.

It is ridiculous that Dutch schoolchildren who learn from this textbook get a version of history imposed on them in which Muslim fundamentalism as a source of anti-Semitism and hatred of Israel is kept secret. This is in complete conflict with the government’s policy of combatting anti-Semitism.

Likud of the Netherlands has, of course, submitted all 41 findings to publisher ThiemeMeulenhoff. It conceded that many statements were incorrect or tendentious, but wanted to make only three minor changes for the next edition: out of all issues mentioned above, only number 3 and 4 will be somewhat mitigated.

This book should not be used in Dutch education anymore.

Click here for the 41 identified inaccuracies and the publisher’s shortened reaction (in Dutch).